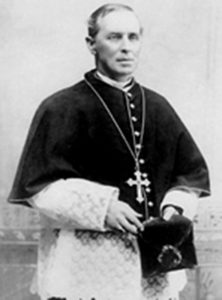 1839: Fr. Pierre Jean DeSmet, a Jesuit from Belgium, comes to America without even saying goodbye to his parents after being called to serve in the New World. Fr. DeSmet had a particular interest in working with the American Indians and worked his way across the United States, setting up missions along the way.

1877:  St. Ambrose Church is built in Deadwood – probably the first church in what would become the Diocese of Rapid City.

As part of the Vicariate of Nebraska, Bishop James O’Connel sends Fr. John Lonergan to minister to prospectors in Deadwood.  His first Mass in the Territory is celebrated in a carpenter’s shop on May 22, 1877.  Soon afterward, six sites are selected for churches and a fund drive for a hospital begins.

Thanks to a generous volunteer we have scanned as many yearbooks as we could get our hands on! Enjoy these blasts from the past! If you see a year missing and you have a yearbook you would like us to scan and post please contact us!